The Odds On Winning A Car At A Charity Function 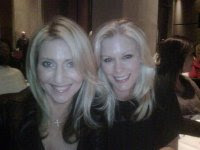 Last Friday I was kindly invited by one of my best friends to attend the Long Rugby Breast Cancer Charity Lunch held at the Hilton Hotel in Sydney.

There are many things dear to my heart and breast cancer and the effects of it are one of them.

There have been many people over the years who have touched my life that have been diagnosed with Cancer and I have watched them and their families be effected by this heart wrenching disease.

To donate to a charity such as this is an honour and when I am invited to a charity lunch or function that requires me to donate, I am only too happy to oblige.

Lunches such as this are about giving to a good cause and also having a great time. I was at a table hosted by Sharon-Lee, the eyebrow guru, who is not only stunning outside but inside too. Her family has been affected by breast cancer and she kindly donated goods to the cause and encouraged her friends to attend. May I also add, her eyebrows were perfectly arched and plucked – much to the envy of the tables of women that surround our table. Who would have thought 10 years ago that an empire would be built on eyebrows?

Another person at my table, Michelle, was a successful investment banker and my close friend Sam, is a radio announcer and television presenter who has built a successful career. There are so many women out there that are successful, charitable and have so much to offer the world. Whilst I am not an advocate for Women’s Awards as I do believe in equal billing, I do take time out to admire my female counterparts and applaud their successes.

There are so many amazingly talented women out there that to be able to spend an afternoon in their company is both invigorating and inspiring.

There were silent auctions and raffle tickets – all of which I participated in with vigour. Sam and I decided that we wanted to win the car to spend the proceeds on a girls holiday at Xmas, so we quickly departed with $500 to buy 6 tickets in the draw.

Sam was so sure that we would win that she was spending the money on everything from helicopter flights through to shopping sprees.

As they asked people to stay standing if their numbers were from 100 to 500, our excitement built. Then they asked to remain standing anyone between 100 and 200 – and all of a sudden I realised we were in for a chance! A sweat bead on my forehead started to trickle down the side of my perfectly made up face and I began to get nervous, then they called out a number … and it wasn’t mine! How many times have we all been in this predicament whereby we believe we are going to win something and the excitement mounts, only to be disappointed by the wrong number or name coming out? Some lucky young Irish man had won the car and they aren’t even good a rugby! How does that happen?

Trying not to be too disappointed, I sat down and both Sam and I talked about what we could have done with the money for the next hour or so.

It was kind of like when I put in the lotto for the first time 2 weeks ago for the $96 million dollar draw. I had spent that money in my mind pretty fast that time too.

What else would one do with that sort of money?

The odds of winning anything is quite slim – particularly in my case. As always, it seems the same people win things over and over again. They are called ‘just plain lucky!’

I on the other hand I am not so lucky. I have to work for everything I achieve and do – which really isn’t so bad. I feel privileged that to date I have had good health, a loving family and the most interesting and diverse group of good friends one could ever hope for.

The odds of winning a car at a charity are 1000 to 1, but the odds of having a good life, are all about what you make of it.

I have a business that I am proud of, a career that has spanned 18 years and I care about those around me.

What more can I ask for?

Join us on social media

Mellissah Smith is a marketing expert with more than 20 years experience. Having founded and built two successful marketing companies internationally, she is well recognized as a industry thought leader and innovator. Mellissah started her career working with technology and professional services firms, primarily in marketing, public relations and investor relations, positioning a number of successful companies to list on the various Stock Exchanges around the world. She is a writer, technology developer and entrepreneur who shares her thoughts and experiences through blogs and written articles published in various media outlets. Brag sheet: #2 marketer to follow on Twitter (2003), Top 150 Marketers to Follow (2015), Top 10 innovative marketers (2014), 60K+ followers on Twitter with 97% authentic.

More in this category: « Melbourne City Council – You should be ashamed of yourself! Great Ideas Come In The Shower »

Make sure you enter all the required information, indicated by an asterisk (*). HTML code is not allowed.